Lady Gaga has started her column in V magazine, referring to herself as a 'librarian of glam culture'.

Gaga also appears on the cover of the magazine — billed as the Asian issue — as a three-headed creation in black underwear, while the interview is conducted by none other than Elton John. In the interview she discusses her parents' concern for her health, saying that exhaus­tion has become her state of being and that she and her dad don't really talk about it too much as they're both "whiskey mouth[s]".

The column focuses on glam culture, with Gaga claiming she can "look at almost any hemline, sil­hou­ette, beadwork or heel archi­tec­ture and tell you very precisely who designed it, and what cultural and musical movement parented the birth, death and resur­rec­tion of that par­tic­u­lar trend". The biggest rev­el­a­tion, however, is that Lady Gaga owns a George Foreman Grill. Amazing.

In other Gaga news, last night she performed two songs on the Graham Norton show during her promo trip to the UK, with one of the songs performed in a tank of goo. She then played a secret club show in front of will.i.am, Florence Welch, Geri Halliwell and, er, Holly Valance. 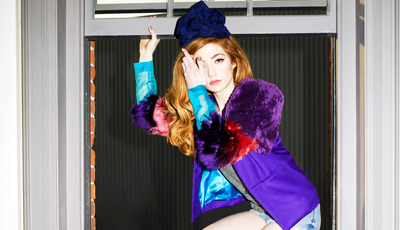