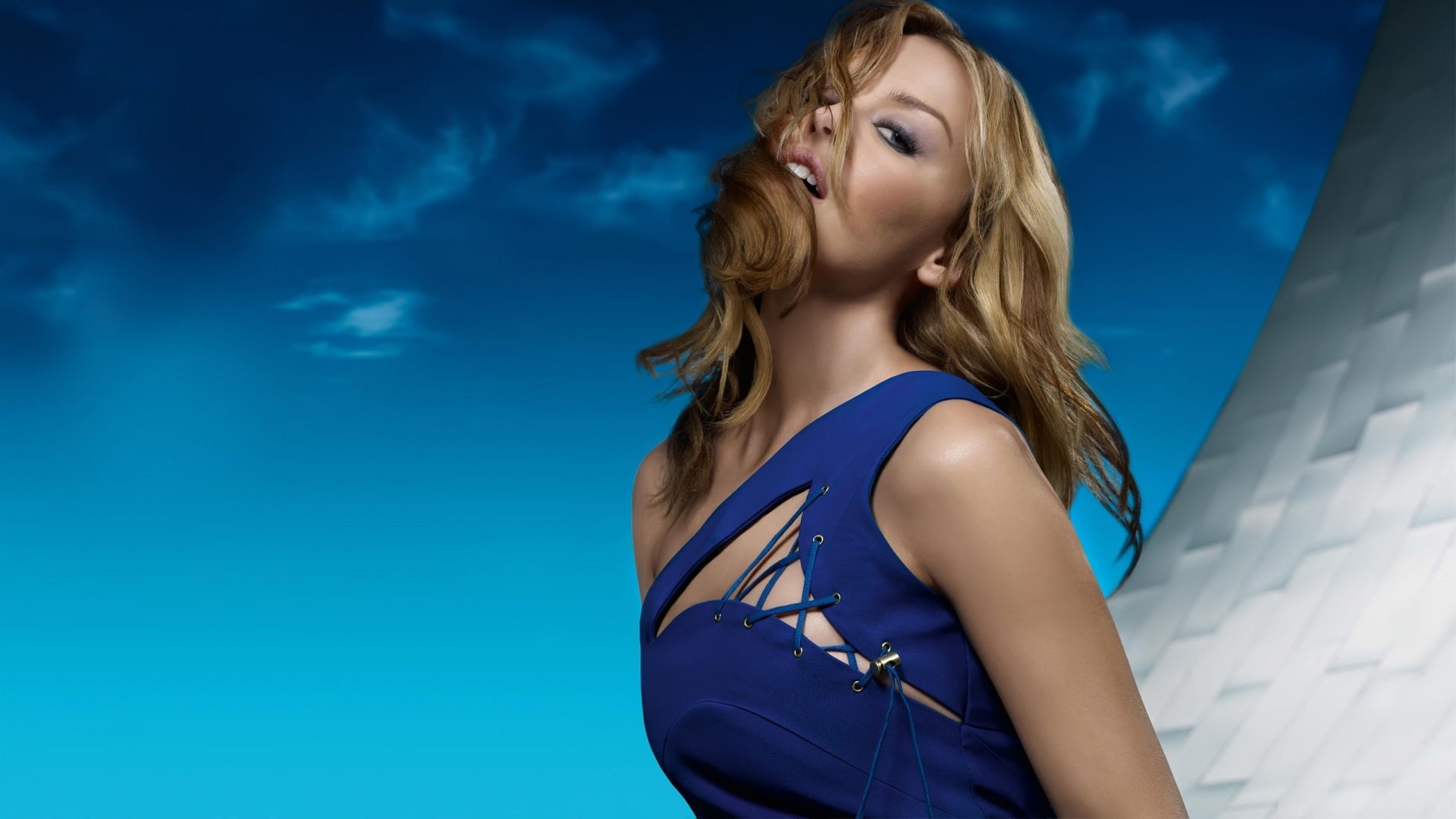 Kylie's got a new single out. It's pretty amazing. But enough pleas­ant­ries, let's have a look at some interview.

What’s the point in releasing another album?
That’s a very good question — I ask myself that sometimes too. Um, I think that the inspir­a­tion for getting back in and starting this whole roller­coaster again was after the shows I did in North America. They were so from the heart and I felt so rewarded with the feeling and response from doing it. That just gave me that reminder of how amazing it can be. That helped get me back on.

Touring and making new music are quite different things, though — what was it about per­form­ing that made you want to make new songs?
Well, to add to the per­form­ance. I’ve done so many rein­ter­pret­a­tions of so many songs that the idea of having something fresh put within that was tit­il­lat­ing. Just going back to your comment about the studio versus the stage, I can under­stand why people would want to stay on the road because you create your own bubble. You almost don’t live in the real world. Just to have the things that are with you is fine. Then you get home and there’s paperwork and you think, ‘oh my God, I’ve lived perfectly happy without any of that’ and you have a bit of post-tour depres­sion. And then you’ve got to do something again, so I guess, you do the album. It’s just the proven cycle.

Is it dis­ap­point­ing and/or frus­trat­ing that your fanbase seems to want such a specific thing from you and reacts quite badly if they don’t get it?
It’s a fine line. I can get really ticked off sometimes when they seem to feel quite entitled.

It seems that the internet — with forums and social media and so on — fuels a par­tic­u­lar type of fan entitlement…
Well abso­lutely because they can be faceless and they can say whatever they want. But even if it annoys me I can say, ‘well, at least they’re pas­sion­ate’. And that can be harnessed in a positive way more often than not, so that’s fine.

So when ‘All The Lovers’ came along and the piece on the Popjustice front page described it as ‘proper Kylie’, did you think, ‘well, hang on, piss off, who’s this person to say what’s proper me and what’s not?’. Is the pos­it­iv­ity of someone going ‘this is proper Kylie’ actually quite negative and confining when maybe you’d have preferred to do something else?
Yeah I totally know what you mean — didn’t you get that package I sent in the mail? (Laughs lengthily at concept of Minogue faeces parcel). No, I under­stand it now and I didn’t quite get it with ‘X’… I knew people weren’t entirely happy, I knew there were genius moments on it and perhaps parts were a bit ahead of their time but it didn’t sit with me and my audience at that time. I just agree with you. It’s fine.

What’s your favourite song on the album?
If I were to choose one to have a blast of right now I’d choose ‘Aphrodite’.

‘Aphrodite’, in many ways, being the sort of comeback tune people were hoping for, or expecting, a few years ago.
Yeah. Yes. And ret­ro­spect being the cow that it can be I now look back and realise that yeah, it would have been great then.  And it also would have been great to have songs that I’d written about that dark period in my life. And I don’t know exactly why those songs weren’t on the album but I went with what I thought was the better judgement of others and… And I now under­stand that a fan or someone who sent out positive vibes to me through­out that period would have wanted to hear something… SOMETHING about that period. Not ‘hey I saw you across the dancefloor’.

Yes.
But, I dunno if I didn’t see clearly enough then, or if I didn’t have the strength to fight for what I wanted… I dunno.

Well one point to remember, perhaps, is that many of the fans wailing in the streets that ‘X’ didn’t cover various topics would be exactly the same people accusing you of milking it if you had, in fact, addressed those issues in your songs. But it felt odd that there seemed to be so little emotional investment.
Yeah. I get it. I suppose my response to that was at least doing a couple of those songs on the ‘X’ 2008 tour, so people at least had an idea…

Also, most fans just made their own versions of ‘X’ from the demos they got online.
(Brightens up) I think they HAVE, yeah! These days you can get so much feedback from fans through Twitter and everything, and I’d love to do the anti-tour, like a two week run in Soho of all the songs that will never be on tour. The ones that fans hold really dear that I’d love to have the oppor­tun­ity to perform.

This sounds like the sort of show that would please anyone per­sist­ing with the idea that ‘Impossible Princess’ is your best album.
Yes! I have no idea whether it is or isn’t but I think what resonates for that album’s fans is that you could see a little bit of my thought pattern in the lyrics that came from me.

So what would we find out about you from ‘Aphrodite’?
Well I still haven’t written on this album anything about that time, because it didn’t feel like the right time. This album is more about being in a pretty happy in my moment in my life.

You see happiness is all very well Kylie but it doesn’t usually make for very good pop music.
I know! But I think the lyrics def­in­itely have a… Well with ‘Put Your Hands Up’ for example, have you ever met the Nervo girls? They’re a ball of energy! I tend to go back to my favourite… Not lynchpins but you know what I mean. I do like cosmic thoughts.

Do you have Kylie moments when you listen to your own music?
What does that mean?

Well, a Kylie moment is when a bit in a song inspires a slightly unex­pec­ted surging emotion, and happiness but also some sadness, with a sense of being slightly close to tears for no real reason. It is a bit like Christmas.
I have that a lot! I have it a lot in the studio. Actually I’ll confess, I had a Kylie moment about twenty five minutes ago. I just saw the latest edit of the video and when it goes into that rush part after the tiny middle eight the vision and the sound made me make lots of firework noises. I’m very vocal. I’m a good audience member!

If ‘Aphrodite’ turned out to be your last album, would it make a good farewell album?
I think so. I think it’s joyful. It’s like the jus of all the best bits of my musical career. And it has enough of those Kylie moments you talked about. It’s reflect­ive in some parts — and I think there’s enough to it so that it doesn’t just bang you around the head. When Stuart and I were compiling the tracklist we decided that we have plenty of bangers and that’s when we decided we needed songs like ‘Closer’ to bring it down a little.

Do you think Stuart Price should be knighted or at least receive some sort of official recog­ni­tion for his quite good pop tunes?
He should at very least be on one of the plinths in Trafalgar Square.

What would he do on the plinth?
If he had his time up there on a plinth he’d be geekily eloquent and he’d seduce everyone with his charm, and he’d be wearing grey socks because that’s what he does. You can take the man out of his studio but you can’t take him out of Burlington socks.

A lot of producers are a bit weird aren’t they.
Fortunately he isn’t like that. He might have that studio gene but he also has another gene that com­ple­ments it — that socially capable and enter­tain­ing gene.

When he told us about the album he said that instead of the usual label politics about who gets which songs on an album this one simply came down to who had the best songs. That seems like a nice idea but slightly fanciful, is it true?
(Sighs) I’m sure there was some of that that needed seeing to with Miles and Elias from Parlophone but frankly that’s their job and they can sort it out.

Let the boys sort it out among themselves.
Exactly — get on the phone, get off the phone, go and have a drink to talk about it, blah blah blah. But that’s just the technical part of it and that red tape stuff has to be done. But I think it was incred­ibly generous — and that generous spirit does come through on the album — for those other five producers to send all their stuff through to Stuart and to feel confident in his ability [to make it all work together]. I was worried. I was thinking, ‘oh my God, they’re not going to be happy, it’s not going to work, I’m trying to do something that’s impossible’, but amazingly it all came together and it all worked. I wasn’t privy to any of that tab­leth­ump­ing, although I’m sure it happened.

One privilege of being ‘the talent’.
It’s more because they had me working in the studio every hour! (Chuckles)

There has been some debate over whether Radio 1 were right not to imme­di­ately A‑List you. Are you appro­pri­ate for Radio 1’s perceived demographic?
Well of course they should play me! (Laughs) I think that single two is probably going to be more up their strasse. We did discuss this when we were talking about what the first single should be and we just kept coming back to the statement of ‘All The Lovers’. And regard­less of how it goes in the chart the impact it’s had already is the impact we dreamt of. (Pause) I heard it on Capital the other day and I was really excited.

Well Capital is, of course, London’s hit music station.
More to the point I’d been in the car for an hour, I hadn’t heard it on the radio and I was starting to get tetchy. (Cackles) I stayed on Capital the whole journey. I was thrilled.

Will you be releasing a barrage of duvet covers during this campaign?
(Laughs) We’re all about the music at the moment.

*
Good old Kylie. Here is her official website, here is 'All The Lovers' on iTunes, and here is the video.

James Yuill — 'On Your Own'