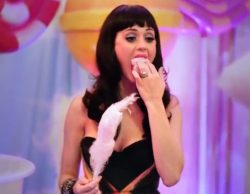 In the clip we get to see the 'Faith Won't Fail' chanteuse backstage putting on a dress made to look like a tiered cake, some peacock-style feathers and a candy-coated spinning bra thing.

At one point a dis­membered voice says: "I think Katy is a dreamer. Her dream is to get to be herself and inspire other people."

Katy herself says the following: "I think that in some ways I live in a fairytale."

Imagine if, like they do with music videos nowadays, they're planning on teasing the entire film in this way. How awful.

Nicki Minaj did a Pepsi advert because she liked Beyoncé's one