Thanks to everyone who voted in this year's Popjustice Readers' Poll. We've compiled all the results and you can read them here.

It's not great news for Nadine Coyle, who picked up 5th Worst Single and Shoddiest Pop Video for 'Insatiable', as well as coming top in our new Worst Attempt At Launching A Solo Career category.

This promo picture pretty much sums up everything that was wrong about the Nadine campaign. She's a singer (hence micro­phone)! She's sexy (hence being dressed as a sexlady)! She, er, thinks that's all it takes! 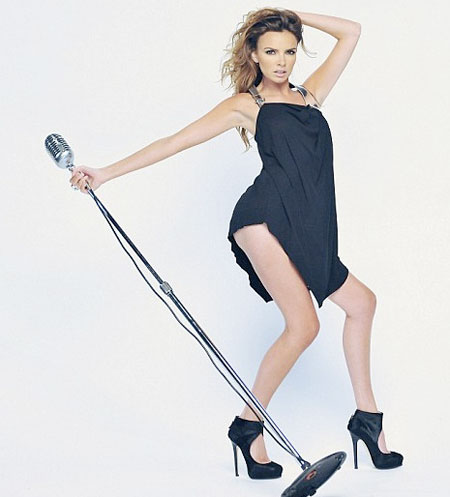 In the end of course it took far more. Or maybe it just took something different. Whichever it was, you could see the underside of the base to her mic stand in this photo and that wasn't what we wanted from our popstars in 2010.

We don't want to see mic stand under­sides, Nadine. Not if they look like that. Solid black ones, perhaps. But with the red circular screw thing attached to the pole? And the black rubber bits on the bottom? That is something nobody should see in a promo pic.

Perhaps, in 2011, take a little time out from 'looking sexual' and turn your attention to the bottom of your mic stand.