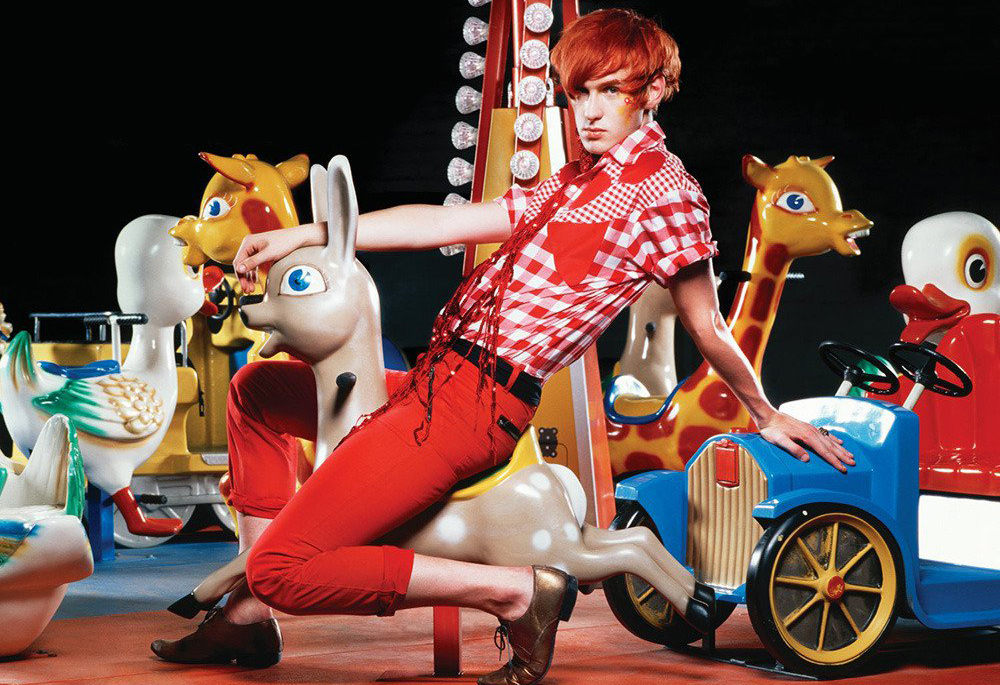 We once saw Patrick Wolf on the bus eating a doughnut. Another time we saw him on the London Underground trying to navigate Earls Court with an old lady's shopping trolley.

When he is not riding around on public transport, Patrick Wolf makes pop records. His latest, 'The Magic Position', is very good indeed, so we spoke to him over the telephone about it…

You can't say that.
I can! I keep all the really good stuff for my own secret time. I record music every day for myself.

Does your label know that you are keeping the really good stuff for yourself?
They probably wouldn't think it was any good at all!

All anyone cares about in 2007 is bloody Mika. In what way are you like Mika?
Do you really want to go there? I get very confused as somebody who released records for five years and got to number 243 when a new artist comes out and does so well. I guess there is a thing of paying your dues a little bit. But it's fine. We live in an age where you sign with a major label imme­di­ately then they throw £200,000 of advert­ising at you and you have a hit record. Which is nice, I'm sure.

How much have your record label thrown at you to promote your record?
Not much, because it's my money at the end of the day. I'm a very good business man.

In ret­ro­spect, do you think you should have camped your album sleeve up a little bit?
I was going to dress as Divine, actually.

How high main­ten­ance is your hair?
It depends how drunk I am. It can take anything between one minute and half a day.

Do you have to keep re-applying the dye to make sure it doesn't end up looking faded and shit?
Well, when I was packing up my flat [to move] I was counting and I have over 24 wigs. Over the years I've built up a col­lec­tion. So if I lose my hair I'm going to be fine.

The red hair is your own though…
I must thank Geri Halliwell for the inspiration.

How would you impress the judges at an X‑Factor audition?
I've been talking to a friend about this. I've been going to Shepherds Bush Market recently and I am inter­ested in those wigs which look like Sinitta's hair — those long black ones with the wet look curls.

Which super­mar­ket chain has your custom, Patrick Wolf?
Morrisons. They have Bettabuy there. You can follow the trail of families who are on treasure hunts to find the best Bettabuy price.

How do you pri­or­it­ise your shop?
My food shopping is very much budget-driven. I have cupboards full of Bettabuy kidney beans.

Where do you buy your pants?
I don't really wear pants. My mum bought me some really small, small pants last Christmas and my friends thought I was having some sort of paedo-fantasy when I wore them, because I never wear pants. I threw them away, along with the few pairs of pants I did own.

Do you not wish you had held on to a few pairs in case there was another cold snap?
To save me from getting piles?

Or worse.
What could be worse than piles? There can't be much worse than a case of piles.

Patrick, are you speaking from experience?
It is the unspoken disease of touring, which every sound engineer or tour manager who sits in a van will know about. I tend to bring a cushion these days. I've learnt a lot over the years.

Perhaps you should provide com­fort­able seating for your staff as well.
It's the sort of thing you discuss…

Do you employ a cleaner?
No, I was thinking about going on How Clean Is Your House?, actually. It just took me over a week to clean up my old flat and my kitchen sink was black with mould. I'd not been there because I have been working every day.

That's no excuse. Would you really want those mad old bats scraping their fingers around behind your u‑bend?
I think my flat would give them a nervous breakdown.

Are you going to get dropped if you don't have a Top Ten single?
No. I have a good contract. I'm a wise person. I'm doing a remix project for the American release and there are going to be some rave anthems in there.

Do you like Girls Aloud?
Yes. Of course. They are champions. We're on the same label and that was one of the main reasons I signed with Polydor.

That must be part of your good business sense.
My TV person is their TV person as well.

What will be your opening gambit when you finally meet Nicola Roberts?
My first line? I'll probably ask her what her favourite Bettabuy was at Morrisons, actually. You can only put that quote in context by the way. There has to have been the earlier mention of my obsession with Bettabuy. It's not derog­at­ory toward Nicola.

Consider your quotes in context. Thank you Patrick Wolf.