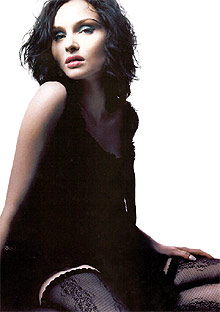 1. It is all kicking off with the release of a song called 'Catch You', which is all about being a bit of a mental stalker. It is a proper pop song by a proper popstar.

3. The video is VERY GOOD INDEED and features Bexto looking for something. The video was directed by Sophie Muller, the woman behind about a million other amazing videos, and Beyonce's 'Deja Vu'.

4. 'Catch You' is the best thing Sophie has ever done…

5. …apart from some of the other bits on her new album ('Trip The Light Fantastic'), but that is all TOP SECRET and cannot be discussed for the time being, or at least until it leaks onto the intranot which will probably be in about three days.

6. Let's hope she doesn't go round swinging dead foxes all over the place this time.

7. She is not blonde any more.

8. That's basically about it for the time being, so let's just recap on the two main points here:

The Popjustice Ten For 2007