Below you will find details of ten pop acts we think are really good, and who are coming out this year. As well as our own shoddily cobbled-together words, we've asked each of the artists to explain to you, the Popjustice viewer, why they are amazing.

Before any of you lot start banging on about the so-called 'curse' of Popjustice can we just state for the record that we do not know if any of these people will have hits and we don't care. 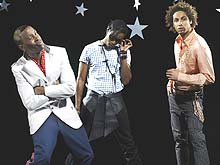 We first met Unklejam, a sort of elec­tronic R&B boyband without any of the tragedy-laden baggage that usually comes with a new R&B boyband — about two years ago. They've now got a new name and a new lineup but the same slightly mental outlook on pop. A James Brown-down-the-disco single called 'Luv Ya' is doing the rounds in terribly credible nitespots at the moment.

They say: "We've managed to put a whole heap of nonsense together and we've made something that's special and unique. When we set out to make music, it was about being as left of centre as possible, because if we didn't, we wouldn't be ourselves."

Listen to something: 'Stereo'. 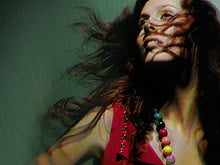 Siobhan's not really new either but she's got a new record deal, she's a proper popstar with proper weird-sounding pop tunes, and WE LOVE HER.

They say: "I am very proud of my work on my new album. 'Ghosts' will surprise a lot of people, no one could have seen this album coming from me."

Listen to something: 'Don't Give It Up'.

And that, viewers, is your lot.

There are loads of other people we also like and we will tell you about them during 2007.

In the meantime, if there's anyone you think we should be listening to, just drop us a line…

Ten things you need to know about The Return of Bexto