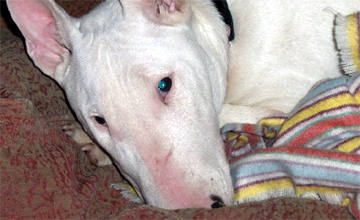 This is Lily Allen's dog, Maggie May. We believe the breed is offi­cially known as 'pigdog'.

Lily is very upset because over Christmas Maggie May was stolen — not lost, STOLEN!!!11! — out of a van. Lily wants the dog back. If you have seen the dog there are details of how to return it on her MySpace page.

As you can see from this picture it was more guinea pig than dog and we suspect that sinister genetic exper­i­ments aiming at the first 'guinea dog' may have been to blame for the poor fella's short existence.

Mushky (right) belonged to a friend of Plan B and his dis­ap­pear­ance earlier this year was so dis­tress­ing that a reward of Â£1000 is still on Plan B's site (here).

We hate to be gloomy about things but Mushky is probably dead by now. Perhaps 'Plan' could write a shocking and con­front­a­tional rap about it. THEN people would listen.

EXHIBIT C
Jamelia had dog in her video for 'Beware Of The Dog'. We think you can probably see what they've done there.

Given the lack of luck con­nect­ing popstars with dogs in 2006, we think it's fair to speculate that if there had been NO dogs in Jamelia's video the song would have done better in the charts.

EXHIBIT D
One of 2006's quint­es­sen­tial dogs-in-pop-videos moments was in Nelly Furtado's 'Maneater', in which Nelly goes in search of her lost dog Toby and ends up in an under­ground disco.

Unfortunately, as we know all too well, searching for lost dogs tends only rarely to end with a bit of a dance in an under­ground carpark and, more often, climaxes with a tearful rummage through the bins round the back of the local leisure centre.

We hope that 2007 is a happier year for popstars' canine friends.

Ten things you need to know about The Return of Bexto