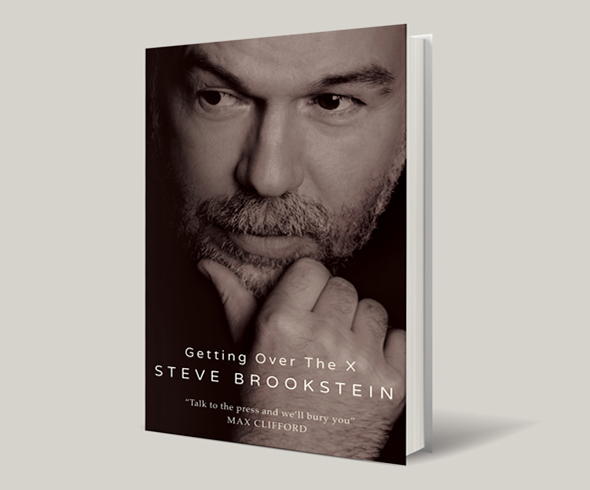 Years before liv­etweet­ing turned The X Factor from an enjoyable light enter­tain­ment telly exper­i­ence into a blood­s­port, one man was yelling "WORRALOADOFOLDSHIT" at anyone who'd listen. Now, he's written a book.

In 2004 Steve Brookstein was The X Factor's first ever winner. He released a Number One single and a gold-selling album, then he was dropped. The X Factor has since written him out of its history.

These days Steve is usually portrayed as bitter, and his Twitter feed is not exactly one that depicts a man capable of cheerily LOLing away his exper­i­ences. To be honest, if Steve was bitter that would be quite under­stand­able — would any of us really not hold a grudge if we'd been fired for doing a decent job? — but he seems angry more than anything else, and it looks like the book is all about explain­ing why.

Steve announced the book over the summer, and finished writing it five weeks ago. "The book I've been meaning to write for years is finally finished," he wrote, "and on it's way to be printed." With any luck he ran it past some subs before he sent it off. Either way we have high hopes for the book, and here's what we'd like to see in it.

Back when The X Factor was audi­tion­ing con­test­ants for its first series, few might have predicted how huge the show would even­tu­ally become — or how much it would contort over the next decade. Even so, Popstars and Popstars: The Rivals had already happened, as had two series of Pop Idol.

You could argue that Steve Brookstein was poorly treated but you could also say that as someone who'd been in and around the music industry for a long time and who'd had ample oppor­tun­ity to figure out the (often hidden) truth of previous reality pop shows, Steve shouldn't have been surprised about what happened to him.

To put it another way: if you sign up for a Cowell-helmed ITV jug­ger­naut, what do you expect to happen?

So we'd like to read Steve address­ing the fact that he should have known what he was getting himself into, even if some of the stories he's likely to tell (which we'll come to in a minute) could never have been predicted.

But we'd also like to read Steve con­sid­er­ing this question: if he hadn't been so vocal about how The X Factor had tried to bury him, would The X Factor have tried so hard to bury him? Did his repu­ta­tion as the leading tinfoil hat con­spir­acy theorist of the X Factor world mean that nobody else would work with him, or take him seriously as an artist? Would he have done himself a favour by not saying anything about the way he'd been treated? Or — and we expect this will be covered in the book — is it exactly that sense of fear that all these TV shows exploit?

Most recently we tried to speak to him was when we were thinking about writing a book about ten years of The X Factor. That would have been a pretty good book, right? Well we knew we needed Steve's input for it to make any sense, and when he declined — very politely, but very firmly — we binned off the idea.

Hopefully some of Steve's book will cover some of the areas we wanted to write about because if the story's told properly there's an oppor­tun­ity for this to be a really strong book about what really happens (or happened) on The X Factor, and what it's really like to move forward in a career when you're high profile enough to attract criticism, but deemed 'over' by the labels, the media and the gate­keep­ers who'd make your work a success.

The first time we tried to talk to Steve, about four years ago, was for a magazine feature, and it was more inter­est­ing. We dropped him an email one morning and later that day he called us for a chat. Despite his obvious mistrust of journ­al­ists he was immensely candid in what he told us; we were only on the phone for about twenty minutes but a couple of the stories he mentioned in passing were truly astound­ing. Maybe he was testing us. Anyway, after years of reading him rant against The X Factor, for the first time we were on Steve's side.

We won't print his stories here because they're probably in his book and they're his stories to tell but if he's managed to get those tales past the lawyers then readers may find that they, too, start to see things from Steve's point of view.

Not too much 'needless to say, I had the last laugh' business 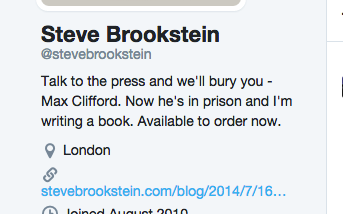 Steve elab­or­ates on this point in a blog, posted in July, about his intention to publish the book.

"Talk to the press, we will bury you." Max Clifford, August 2005
And let's be honest, he did a pretty good job. How did he do it? Often through news­pa­pers edited by Andy Coulson.
It is this more than anything which, ten years on, tells me that now is the right time to tell my story.

Clearly this book is going to be about the settling of scores but with any luck the book won't just be 320 pages of "Max is in prison in 2014 so I shouldn't have been dropped in 2005".

It's easy to under­stand the tempta­tion, but the more Steve grinds this par­tic­u­lar axe, the less cred­ib­il­ity some of his claims may have. If the whole book reads like a vendetta against Max Clifford, there'll be a point where the reader wonders if Steve's being objective, which will harm the cred­ib­il­ity of his argument. Presumably some of the details of his post‑X Factor life are so shocking that they won't need 'BECAUSE MAX CLIFFORD WAS AN ARSEHOLE' at the end of each sentence.

A decent sense of context and self awareness

Steve is not the only X Factor winner who's been swept under the carpet by the show. Leon Jackson is never mentioned these days; Sam Bailey's album was not exactly given the full Leona treatment. Some X Factor winners are voted to victory by people who do not buy music.

For some X Factor winners there just isn't a decent future as the sort of act a major label needs them to be and Steve Brookstein was always going to be one of those artists. It's probably easier to see that when you're not Steve Brookstein.

There also needs to be an awareness that if you're a difficult artist — and in the world of X Factor winners that can equate to saying "do you know what I'm not sure about doing an album of covers" — certain labels won't bust a gut to make sure they get to work with you again.

Finally, Steve's book needs to show an under­stand­ing of the fact that while some of his exper­i­ences may be directly linked to an organised attempt to keep him quiet, the media are not cruel to or mil­it­antly dis­missive of all X Factor con­test­ants who've fallen in pop­ular­ity: they leave Leon Jackson alone, nobody laughs at Stacey Solomon, Joe McElderry's given a decent reception. But they all smile and get on with their lives, and that just wasn't Steve's style. If you're negative and dis­rupt­ive in the media the media will reflect that in future coverage, but not everybody in the media is under Cowell's thumb, or one of Max Clifford's lapdogs.

After he'd sent to book off the printers, Steve wrote about the exper­i­ence and described how the cathartic process of examining the last decade of his life would allow him to close that par­tic­u­lar door forever.

My parents had kept so many magazines both good and bad that I can now happily stick in the bin. I will keep some articles for my children so they can see what I did back then but I see this as the beginning of a new chapter in my life. Louis Walsh couldn't help have a dig at me in the papers this week calling me "that awful Steve Brookstein" but luckily the neg­at­iv­ity towards me is on the slide like The X Factor ratings; it's only a matter of time before it is cancelled.

It's all so nearly over and I can't wait to get my own copy of the book even if it to just place it on the shelf, out of sight and out of mind.

After this book's pub­lic­a­tion will Steve stop talking about The X Factor? Will he fuck. But maybe, for the first time, people will under­stand exactly what he's talking about.

The book's out later this month; you can pre-order a signed copy from Steve's website. 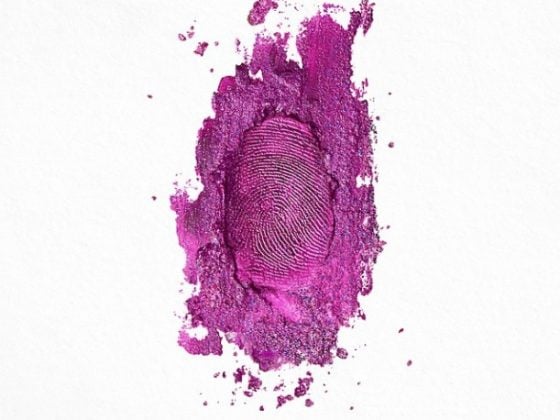