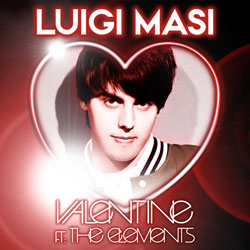 It's hard to know where to start with all this.

If you are already familiar with the legend of Luigi Masi his newest 'waxing' will need no intro­duc­tion, so feel free to go straight to the YouTube embed at the bottom of this post.

If he's yet to cross your path, well, the short explan­a­tion is this: in 2007, instead of using his gap year to build a mud hut or shag Australians, he got his mil­lion­aire dad to buy him a pop career.

There's nothing wrong with that in and of itself — the charts are full of people whose parents offered early financial support, and there's an easily-swayed busi­ness­man or a banker looking to reduce his next tax bill lurking in the shadows of many a sus­pi­ciously-high-budget indie release. But Luigi's case was par­tic­u­larly fascinating.

His videos, for instance, were hardly cheap affairs, but they were strangely lit and full of fast edits, as if they were somehow trying not to actually feature Luigi.

And the music? Well, he got an album out and some of his songs — all with heavily processed vocals pre­sum­ably due to Luigi's inability to carry a tune in a bucket — were pretty good, or might have been pretty good in other hands. We made the ace-chorused 'Strangers Again'  Song Of The Day at one point.

During the spring of 2008 Luigi bought himself onto support slots with both Girls Aloud AND the Sugababes. All evidence has long since been pulled from YouTube but the high profile support slots didn't help his cause — awkward and lacking any sort of star quality, he was one of the worst live per­formers in the entire history of pop. The economic structure of that sort of pop tour means that support bands are a source of revenue just as much as fans. It's fas­cin­at­ing that a live act as bad as Luigi Masi could have bought his way onto tours by the country's two best pop acts. It almost says more about those acts — never mind the quality, they'll take anyone if the price is right — than it does about Luigi. There was almost a punk rock spirit in Luigi's invasion of those tours.

Could the whole thing have been one big situ­ation­ist joke? Answer: no, it was An Actual Thing.

We met Luigi a couple of times. He had that sort of slightly odd manner you usually detect in people who've never really needed to worry about money, but he had a sparky kind of charm, and we liked him. We under­stood that he was a pop fan like you and we are pop fans, and for a first attempt he'd also put together a fairly good pop package. The only real problem was that he'd put himself at the heart of it.

Anyway, lock up your daughters becuase Luigis Masic is now BACK. He dropped us an email a few days ago with an MP3 of his new song, 'Valentine', which is out on iTunes today.

The answer is, well, pretty much what most Luigi records sounded like in 2008: almost good, but not quite.

A Newsdump for 10 February 2012: From Flo Rida being a wild one to Plan B's film sounding like fun