They are set to take the world by storm with songs like 'Year 3000' and 'What I Go To School For'.

They play their own instru­ments.

There are three of them. 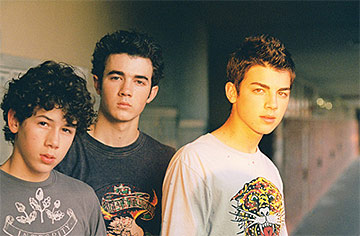 This is new(ish) US act The Jonas Brothers, who've been busily plun­der­ing the Busted back catalogue for their new album. They are brothers whose surnames are all Jonas. That is how families tend to be. You all have the same surname. You usually inherit your father's surname. Sometimes you don't. But that's basically how it works.

You can watch The Jonas Brothers per­form­ing 'Year 3000' on YouTube, here.

Notes on the picture above:

1. Call a doctor! The one on the right seems to have jaundice.

3. The one in the middle looks a bit like Justin did when he was in *NSYNC.

4. Would you agree that their t‑shirts are a bit 'Urban Outfitters'?

5. They seem to be in a corridor. A corridor where, and with what at the end? We may never know. :(

The band also have a song called '7:05' which has one of the best pop choruses we've heard this year and makes us feel a bit funny like 'MmmBop' did.

You can listen to it on the media player at the band's official site, here, or accom­pan­ied by a ludicrous slideshow on YouTube, here.

Thunder in my art