We got sent this 'newspaper' last week. 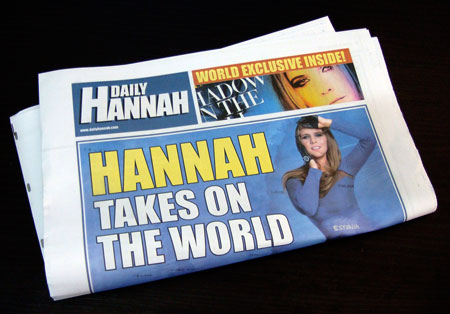 It's about an Estonian singer called Hannah. She seems like a nice enough woman. She's launching in the UK with a single later this month.

It's always inter­est­ing when inter­na­tion­ally suc­cess­ful artists are launched like this in the UK. You find yourself bombarded claims like "SHE'S THE RUSSIAN MADONNA!" or "IT'S THE BELGIAN KYLIE!" (in this instance Hannah is appar­ently "EUROPE'S ANSWER TO LADY GAGA"), and you think to yourself "this will be quite good then", and then you listen to the song and it turns out to be alright in a 'pleasant enough when Texas released it' sort of way, and then there some 'Digital Dog' (or whoever) remixes that get played on Gaydar Radio, and then the money runs out and that's the end of that. 'The', as they say, 'end'.

Anyway, there are two problems with this newspaper. Firstly, we received this over a week ago and the second issue has yet to mater­i­aiise, meaning that this is NOT a daily pub­lic­a­tion at all but instead has a very distinct whiff of something treated as a ONE OFF. Then there is the great bit about Hannah's London. 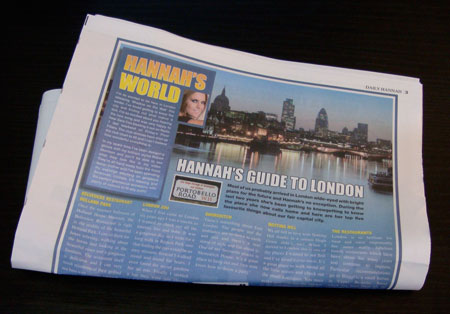 Here's what she has to say about one par­tic­u­lar area of London. "The people and the ambience are so down to earth and real and there's a real sense of style and fun about it." Guess the area. Remember the key points: down to earth, realness, a sense of fun. Go on. Have a guess. That's right, Hannah is talking about SHOREDITCH.