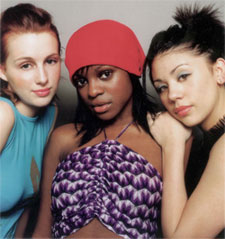 Intermittently reliable gossip website Holy Moly reported yesterday that the Sugababes — and by Sugababes we mean SUGABABES not 'Sugababes'* — are back together and in talks with either Stuart Price or William Orbit.

A reunion would probably be the most awesome pop event of the mil­len­nium (unless it was shit), and this doesn't bode well, but in the event of a reunion what would this lovely trio of warbling ladies call itself?

1. One Touch
Just as suga and babe were a play on spice and girl, so the new name for the original Sugababes lineup could be a play on the Spice Girls' original name, Touch. 'One Touch' was also the title of the first SUGABABES album so it all fits in, do you see etc etc.

2. Babes Aloud
This would be the worst name in the history of bad names, and con­sid­er­ing The History Of Bad Names is a 50,000-page leather bound book with 'Orange Orange' in the first chapter, 'Test Icicles' a few pages later and 'Girls Can't Catch' on Page 8765, you can rest assured that Babes Aloud is a pretty bad name. A BAD NAME.

3. The Shergarbabes
This would only work if famous missing racehorse Shergar joined the band which, under the cir­cum­stances, is not as unlikely as it might once have seemed. This is all a bit like watching something like Flashforward in which an event which is incred­ibly unlikely and pre­vi­ously unthink­able has occurred meaning that if impossible things can happen any tra­di­tional sense of suspense of narrative pace goes out of the window and the whole thing is useless. That is a bit like a racehorse joining the SUGABABES. It's unlikely, but so is SUGABABES reforming in the first place, so anything could happen.

5. Them Apples
As in, 'how do you like them apples?', which would basically be a big old 'fuck you' to everybody else. Do you know what, readers, we've totally lost track of whose side we're on in this whole thing. (Answer: Girls Aloud's.) (We're joking of course.) (Or are we?) *Goes for a lie down*

We hope this has been of some use to the band we'll refer to, in the interim, as SUGABABES.

* Heidi, Amelle and Jade should probably just rename them­selves 'Sugababes' with full-on inverted commas action, shouldn't they, like with Hear'say but different. Perhaps we will write to the 'Sugababes'' man­age­ment and suggest it.

Mini Viva: they're not exactly getting any worse

Hannah I'm telling you I'm not going (to sell any records)