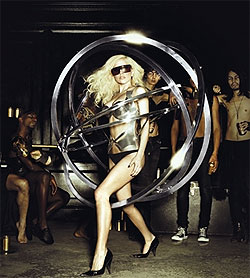 1. Lady Gaga
Who'd have thought the greatest popstar of the noughties would appear in the decade's final 18 months?

2. Donkeyboy
We wrote about Donkeyboy in July but their album came out (in Norway) a couple of weeks ago and is just brilliant. You can listen to clips on iTunes Norway ('Sometimes' is currently Number One and is tomorrow's Popjustice Song Of The Day), and 'Ambitions' is for sale on iTunes UK.

You know about them already, we mentioned them in May. In the time since they've signed a big deal with a big label, recording a variety of soon-to-be-popular tunes, had some posh new photos taken etc etc. Expect to see them on a variety of Big For 2010 lists, along with…

…who you are all intim­ately acquain­ted with thanks to the 'Ms Goulding's Vacuum' feature that has been stuck at the top of this website for somewhere in the region of a million years.

Hannah I'm telling you I'm not going (to sell any records)