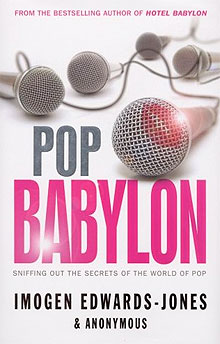 We forgot to mention this book when it came out a few months ago.

It's called 'Pop Babylon' and it's the latest in a series of books in which author ('author') Imogen Edwards-Jones strings together a load of bits of stuff from Top Secret Informants in different indus­tries. There was one about hotels called Hotel Babylon. One about airlines called Air Babylon. One about Fashion called Fashion Babylon. One about the singer from Weezer called Ri(That's enough of that  — Ed)

It's basically a load of rubbish full of badly mis­tran­scribed inter­views and inac­curacies with a dodgy so-called 'plot' thrown on top but some of the obser­va­tions and general points are inter­est­ing enough and if you have a toilet or other recept­acle for bodily waste in your abode this will look good next to it.

If you want our copy you're welcome to drop by the office today and pick it up, but phone first.

Those Xenomania audition dates you were waiting for 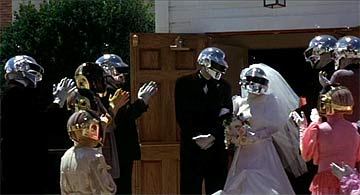 We went to see the Daft Punk film 'Electroma' last night at the ICA, a venue usually reserved for arty events like Busted showcases and Britney Spears album launches. As you might imagine, there are a lot of robots in the film.

It wasn't exactly a laugh a minute and as 2007 robot movies go it will probably struggle at the box office compared with the 'Transformers' movie but it was basically one of the most amazing pieces of cinema we have ever exper­i­enced and unlike a pivotal scene in 'Electroma' we can't imagine we'll be seeing Optimus Prime plodding across the desert only to disappear inside of a massive cunt.

Sadly we still do not believe Daft Punk have another good album in them sadly, but saying that, we would quite literally do anything to get our hands on one of the helmets used in the movie…

Who's new on the Popjustice Almighty? 3

Music off the television; it's quite good