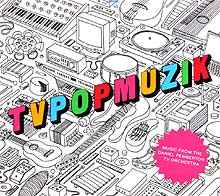 We used to have an amazing cassette of TV theme tunes featuring 'Dallas', 'Telly Addicts' and 'Howard's Way'. Unfortunately it was in the tape player of our first car when the afore­men­tioned heap of shit was towed off for scrap. It is a loss which has haunted our dreams for over a decade but the hole in our lives is now filled, at last, by 'TV Pop Muzik' (it is probably all one word but we've lost the press release) by The Daniel Pemberton TV Orchestra.

Daniel spends his life accu­mu­lat­ing huge piles of cash in exchange for quickly knocked-out music for TV and films, and the 'TV Pop Muzik' (we still haven't located the press release) album pulls a few of his bits together. They appear on the album in a remixular fashion, so while you might not expect to enjoy listening to an album featuring music from 'Bad Lad's Army', 'Hell's Kitchen', 'Peep Show' and — wait for it — 'Love Island', it's all a bit like listening to a proper pop album. There is no proper singing on it but that is probably for the best because singers often tend to ruin quite good music — what we will refer to in the future as 'The Mika Effect'.

It has been on quite a lot in the office and gets a general 'thumbs up'.

Here is a video to go with it.

Daniel also did the music for a doc­u­ment­ary about Jonathan King, in many ways the 'Some Girls' of the tel­lymusic world, but that sadly is not on the compilation. :(