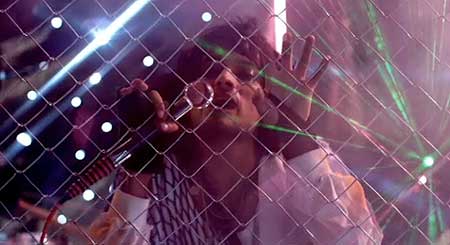 Despite never having written a word about the band we've been given the exclusive on Yeasayer's new 'ONE' video.

This is excellent news as we now have an excuse to 'pen an article' about the band and frankly this excuse couldn't come at a better time as we have been nodding our heads like YEAH to the band's album for some time (about a month in all honesty) and Popjustice's radio silence on the band was starting to become slightly awkward.

The story so far is this:

1. Yeasayer are are Brooklyn and are therefore FASHIONABLE. There are three of them.

2. Their second album includes assorted pop moments including 'Ambling Alp' (here it is on YouTube and it's also on their MySpace) and the above-mentioned (and below-mentioned, as you'll discover when you get there) 'ONE'.

3. The big pop moments are com­ple­men­ted by some songs that are best described as 'a bit of a racket'. Basically imagine MGMT without a song quite as good as 'Kids' but also without any songs quite as bad as the dreadful old guff MGMT are also capable of turning out. And imagine that it has also been immersed briefly in some of the early-80s' best but least-ref­er­enced pop tuneage, and then imagine (THIS ISN'T GOING ANYWHERE AND THEY'RE NOT REALLY MUCH LIKE MGMT, PLEASE REWRITE — ED)

Anyway this is the 'ONE' video. There seems to be some sort of 'plot' which either makes no sense or is so supremely clever that we are not able com­pre­hend its brilliance.

That was the video.

The new Goldfrapp single is not exactly setting the charts on fire.