As those of you whole follow us Upon The Twitter and elsewhere will be aware, we were a little impressed by Take That's riot shields at the Brits.

Well it seems we dropped a suf­fi­cient quantity of increas­ingly desperate hints, because AN ACTUAL TAKE THAT RIOT SHIELD arrived at Popjustice HQ last week. 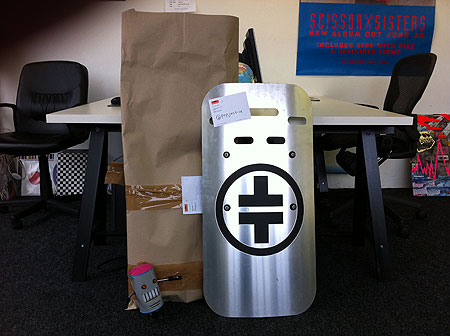 It is one of the best things we've ever touched. And we have touched some impress­ive things.

Here's an inter­est­ing article about the history of the riot shields.

The Nicole Scherzinger album: does it HAVE or LACK merit?