Remember how the last Britney single ('Hold It Against Me' — it was sort of the current Britney single until about 48 hours ago) didn't go on sale in the UK until after the initial excite­ment had faded but before the video was ready, thus being a brave but not-quite-perfectly-executed attempt at the new 'on air/on sale' thing?

Well despite a hint or two, as recently as this Wednesday it had not even been offi­cially announced that 'Till The World Ends' would be the second single from 'Femme Fatale'. Then yesterday morning a thirty second clip of the song appeared on Amazon's German website, and by the evening the entire song leaked.

This morning, it's on sale on iTunes. 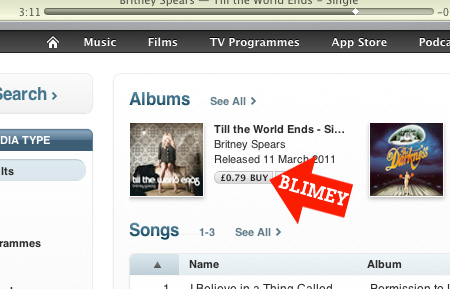 It's not even on air, and it's already on sale.

We don't yet know  if sur­pris­ing the world with this release  was the plan all along, if it's a recently devised response to 'Hold It Against Me' tumbling down the charts a little sooner than expected, or if it's the label reacting extremely quickly to an unex­pec­ted leak, but it's exciting non­ethe­less.

Here's a question for you, though: is releasing the song before it's on air actually as damaging to a high chart position as releasing a song after it's on air? Oh we don't know. The song is amazing by the way. There's a surprise extra chorus two thirds of the way in.

An amazing thing that arrived in the post last week