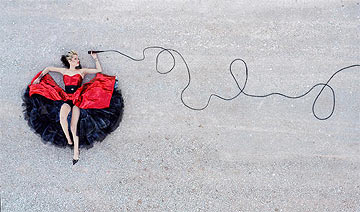 We haven't mentioned Shiny Toy Guns here on the Popjustice frontpage for a while. In case they have passed you by here is the story so far.

1. They are from America.

3. They have been knocking around for around eighty (ie four) years during which time they have been involved in some of the best pop pho­to­graphy of the 21st Century.

5. They released their debut album for a second time later in 2005.

6. They have now released their debut album for a third time (now in a slightly reswizzled form) in 2006.

And — as they say — what an album. Some of it is a bit like what the new Killers album might have sounded like if The Killers had realised that everyone liked them because they sounded a bit elec­tronic rather than because they sounded a bit like Bruce Bloody Springsteen. Some of it is proper elec­tro­pop. It is generally just very good. And they have a lady singer but sometimes the man sings. A BIT LIKE ABBA.

Right now the Shiny Toy Guns album sounds to us like it might be one of the three best of 2006, and you can preview clips in the US iTunes store (direct link here). We recommend you start with these three:

1. 'Rainy Monday'
The most amazing song ever written about pre­tend­ing you are not in love with someone anymore then being reminded that actually you are.

2. 'Don't Cry Out'
We don't know what this is about but it is TRULY GREAT.

You can't buy the album in the UK yet so you will probably have to download it somewhere illegal, but you can listen to stuff on their MySpace, PLUS their spooky online PR person in America has given us the following 'assets' (which Popjustice mailout sub­scribers will have already seen):

How do you solve a problem like not having bothered to record a proper second album?

Win a night with Roseann McBride