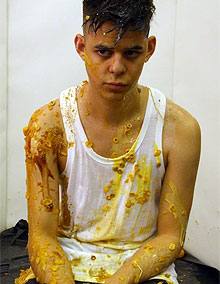 There's a weird but sort of brilliant track called 'I Love You', by Esser.

We don't know very much about Esser, so let's see what he says about himself on his MySpace page.

"Esser is a person not a band. I use a computer machine and some
instru­ments to make popular songs. Most of my songs are in the key of
E. When I was fairly young I managed to wear two ties to school. One on
top and one under­neath my shirt. But look at me now!"

Anyway Esser says that because the song's only coming out as a limited edition of 500 7"s it's alright for you to download his song if you'd like to. So here it is.

You can watch the video below. In the video Esser has lots of food thrown at him and, at one point, is sick. We can't help but feel that the course of pop may have been slightly different had Christina Aguilera employed a similar approach to her own first video.

Contrary to appear­ances that video actually cost £80,000 to make. The food was all added in post pro­duc­tion — it took months.