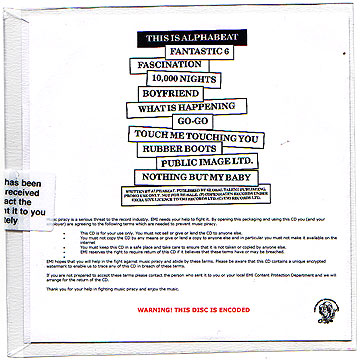 Answer: literally quite good. Their album's been out 'back home' for a while now so they've given the whole thing a spring clean, booting out some old tracks, tarting up some others and intro­du­cing some new ones.

'Touch Me Touching You': is a frenetic elec­tronic sort of thing.

'Go-Go': sees Alphabeat chan­nel­ing Chic with a big "I can't stand up, I can't get down, down, get down go go" chorus. If you like Alcazar this will be 'up your street'.

'Boyfriend': has been competely reswizzled from the Danish version and is now faster and synthy, thus 'danceable'.

'Public Imagine Ltd': is a rather odd PiL track which Alphabeat have made sound a bit like 'Virginia Plain'.

Jump along to Goldfrapp's 'Happiness' video