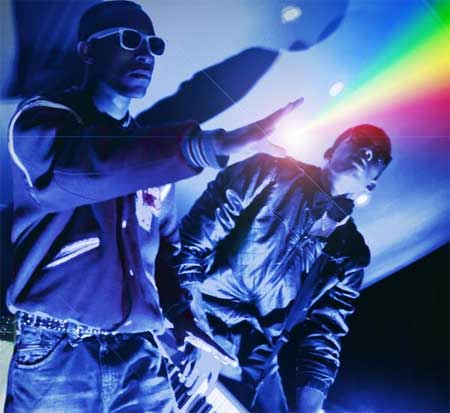 We did a tune by Moonrunners as a Song Of The Day last week. The quartet are managed by the same people as Mika and Alphabeat and
they see them­selves as a sort of 'col­lect­ive' (ie between them they can
produce and songwrite, and design graph­ic­ally and take pho­to­graphis and
make videos and all sorts of nonsense).

There's a track that they're pushing about from here to there at
the moment, and it features a not-exactly-sub­lim­inal Daft Punk sample.

Quite good, obviously, although the song that made us think there was slightly more to all this was 'Edge', which is the song we featured as Song Of The Day and sounds like this.

That's not a very good clip but you get the idea.

Given that if they continue knocking out decent-sounding pop tunes we might end up covering them rather a lot on Popjustice we asked Moonrunners if they would do the 'five reasons we are amazing' thing for us, and they agreed, and they sent over a couple of weeks ago then we forgot to put on the site but basically our survey said:

1. We create everything ourselves using only the minimal resources around us in an intel­li­gent way from the producing and the film­mak­ing to the merch and graphic design.

2. We’re sometimes really poor. So for anyone out there thinking they can’t do their own thing, see us as inspiration!

3. Not many pop/rap groups have a clas­sic­ally trained pianist like Tokio who has performed at The Royal Festival Hall and St Paul's Cathedral and loads more posh places.

4. Not only do we have our own thing going on, we create for other artists too, like Kanye West and Nero.

You can tell this lot are serious because they call t‑shirts MERCH and that is what you have to do if you are serious about The Music Business these days.

There are more bits on the band's MySpace.

Marina & The Diamonds' 'I Am Not A Robot': an old video, a new video