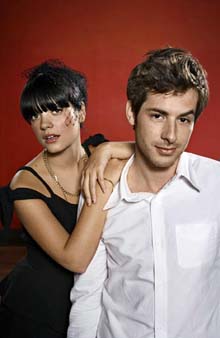 Lily and Mark talk about a lot of things. These include dogs, socks and Courtney Love…

Mark Ronson and Lily Allen are both reas­on­ably suc­cess­ful indi­vidu­ally, and while working together on a cover of Kaiser Chiefs' 'Oh My God' doesn't exactly create some sort of all con­quer­ing enormous fame super­be­ing to stampede through the streets of celebrity it's still a rel­at­ively exciting event.

We spoke to Lily and Mark in the same room recently.

Here is some of what they had to say for themselves.

Hello you two. Let's get the important business out of the way to start with: Lily, is your dog happy again now?
Lily: She's really happy. Seb and I might get another dog and called it Barry, or Terry. Or Peter.
Mark: I was about to say Keith but that's your dad's name.
Lily: There are a lot of dogs in my family.
Mark: There's just one in mine. He smokes a lot of weed…

Is this interview going to end up inspiring any ludicrous 'feuds' in the popular press?
Mark: I don't know. There hasn't been a good feud in so long. What was the last good one, Oasis versus Blur?

Wasn't it 'Lily versus everyone'?
Mark: I think people just jump on everything Lily's said, and I've been getting a bit of that too. There was this thing in the Daily Star that I said all this shit about Timbaland! The headline was 'RONSON RANT' and it made me sound really whingey.
Lily: You shouldn't read any of it.
Mark: The thing I like about how you handle it, Lily, is that you never go back on what you say. My first instinct was to want to let Timbaland know that I didn't say it, but then that's dig­ni­fy­ing the story in a way – making you look guilty. Then there was this Joss Stone thing I said in NME and it turned out my mother was doing this benefit which Joss Stone was going to be at. What should I have done? Should I have apologised?

Would you meant it if you did apologise?
Mark: Er, no. I mean, er, I dunno.
Lily: It's off the cuff remarks which always blow up. Sarcasm def­in­itely doesn't come across in print.
Mark: Things are funnier when they come from a 21-year-old girl than a 31-year-old guy.
Lily: You're right, you just look stupid. (Guffaws)

Where would you take a Popjustice reader on a night out?
Lily: A gastropub somewhere. Oh God, no, I wouldn't take ANYONE to a gastropub.
Mark: I don't really know London that well.
Lily: I think we'd take someone to the Notting Hill Arts Club on a Thursday night.

We did wonder how long it would take for that place to come up in the con­ver­sa­tion, and here it is.
Mark: In a way it's really fucked to tell anyone to go to Yo Yo because it's already packed at 9.30. Like with that 'LDN Is A Victim' track – it's so big that it's become a target. It's not a pre­ten­tious place but a lot of talent's come out of there and it's easy to associate it with a certain scene.

Did you find out who was behind 'LDN Is A Victim'?
Lily: Apparently he works at Eastcote Studios!
Mark: And Just Jack does the beats, apparently.
Lily: I don't believe that, I don't believe he's cool enough. But generally when you hate on people in that sort of way it's because you want to be their friend or you want to be that person.
Mark: I wanna be friends with Joss Stone SO much.
Lily: I really want to be friends with Kate Moss and Madonna.

Why do you think so many people thought 'LDN Is A Victim' was hilarious and amazing?
Lily: I dunno. It didn't really annoy me. It's not nice to hear people being nasty about you, but either you're going to have something new and exciting or things won't move on. Acts like myself, and Jack Penate, and Kate Nash – it's better than having S Club 7 times one million. Or from Popjustice's point of view maybe you disagree, but…
Mark: I think one of the things I like about Popjustice is that there's no snobbery about music. It just sorts out the good stuff from the bad stuff — most of the time. I mean Pussycat Dolls, when I hear a song like 'Beep' I just picture three obnoxious song­writers in LA sitting in a room together going 'Hey, what's the next gimmick – I know let's have a beep in there! And that'll be so hot!' And they're all high-fiving each other. It's like that Smiths song, 'Paint A Vulgar Picture', that's about record company meetings. You can just see the fucking thing.
Lily: I think with those man­u­fac­tured pop things you can deal with the aes­thet­ics of something if you think the music has come from something genuine, whether it's from a band member or from a songwriter.

So the problem is not with man­u­fac­tur­ing music but with man­u­fac­tur­ing music which means nothing to anyone? Writing songs to a brief?
Lily: I hate that generally about the music industry – and I hate that when one thing happens which is an exception and is genuinely exciting then suddenly you have the follow-ups. Like Mika and the Scissor Sisters. He's been slagging them off, saying he doesn't like them! He wouldn't be here if it wasn't for them. I quite like his stuff but I don't get that.
Mark: I think that people like you, Lily, or even The Fratellis or Mika or whoever, the fact that you're making a dent in the American album charts is a good sign.
Lily: Who are The Fratellis?
Mark: They're der-der-der der-der-der der-der-der…
Lily: I heard that they slagged me off. Apparently I went up to them at the Brit awards and told them that they robbed me. I didn't even know it was them who beat me – I'd switched off when I went in the door because I knew I wasn't going to win.

Lily, are your label demanding your new album yet?
Lily: They know not to demand anything because then it doesn't happen. I'm meant to be going to New York to write for a couple of months and they're getting really funny about paying for my apartment and studio time. As soon as that starts happening – the whole money thing, when you're trying to be creative – and as soon as they start calling up on the third day asking if you've got the first single yet.
Mark: Do they really give you a hard time?
Lily: Not the people I work with closely but def­in­itely the business affairs people. The creative and money sides of labels are two com­pletely different entities.

Lily, has Courtney Love given you The Talk yet?
Lily: What's the Courtney Talk? She was a lovely lady.

Apparently it's just a 'general tips for young pop people' talk she does…
Lily: No, she didn't give me any advice. None that I should follow, anyway. Er, I'm not going into it…
Mark: That has to be the first time that Lily Allen has ever zipped her mouth. She must have really put the squeeze on you, Lily.
Lily: Well she's sort of scary, isn't she?
Mark: She was at the Amy [Winehouse] show, too. I wonder if she's doing the same thing with her, chasing after you girls…
Lily: Amy seems to fall for that a bit doesn't she? I always see pictures of her hanging out with famous people.

Is it easier to become a popstar if your family's loaded?
Mark: Well, I've never taken money from my family so while I obviously had certain priv­ileges growing up I still…
Lily: Basically he still ripped off a LOT of hip-hoppers by charging ridicu­lous money for playing at their parties, then spent it all on equipment.
Mark: Well, err, yeah. I see things where people say 'I could do 'Version' if I had ridicu­lous money'… That's rubbish, really. When I see Scott Storch with giant diamond bracelets on I think it looks ridicu­lous. At one point in urban music that display of wealth meant something – it meant 'look where we've got', and it was positive. So to see someone like Scott Storch wearing it is ridiculous.
Lily: Also, there are plenty of people who do have all the money in the world thrown at something and it doesn't get anywhere simply because it's no good.
Mark: Lily has a much more level-headed view of things than I do. I think people have an idea that things have been easy for me when they haven't really. About 18 months ago I was ready to give up trying to be a producer because I just thought, 'maybe I'm never going to make a good record again'. I just thought, fuck it, I'll make music for TV com­mer­cials and at least I can carve out some sort of life for my girl­friend and my dog. And then at that point, when the pressure had come off, I did start making good stuff again.

Mark, will you be doing anything to compete with Lily's clothing line?
Mark: I'm doing an exclusive line with Sock Shop. I'm doing a line of Ronson ankle socks, but they're just going to be in the airport Sock Shops so I'm not sure if it's going to take off.
Lily: Ronsocks!

Have either of you been given media training?
Lily: I was offered it but I didn't have time, for a start. And I couldn't be bothered. It's like going to the gym.
Mark: I read articles with Lily and admire the honesty – it's a key to longevity.
Lily: Then again, so is keeping your mouth shut.
Mark: No, I think people like you. Especially in America when you call George Bush a cunt on stage and half the audience walk out, hahaha!

Thank you very much Mark Ronson and Lily Allen.

A Dame covering Pink is for life, not just for Christmas

The Marches — 'Turn It Around'