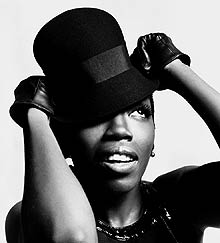 How are summers different for you as a famous recording artiste?
This time around it's all just bigger.

You have 'gone global'.
Yes. I'm living out of two cases at the moment.

How does your carbon footprint compare with those of other singing legends?
Oh god I try really hard. I try to recycle. In hotels I try and pack up bottles different from the rest of the rubbish. I see what's happening with the ozone layer! I really don't want to have kids right now. You're just never sure!

What can we do, Estelle?
I don't know. I'm trying to reuse towels and things. But we always reused bags at home, that's how our mum brought us up.

Have you ever had a carrier bag from a super­mar­ket split on you?
Oh yes.

You see this is where double-bag culture came from.
And another thing is that they're trying to make it as cheap as possible to create a bag, so they end up being rubbish. It just doesn't make sense. But now people are using proper bags, or if they're just buying a sandwich they're using their handbags.

This is something men cannot do.
Carry it in your hands! And what about rucksacks?

Rucksacks are alright but you never know what's happening behind you.
That's true. (Long pause) I don't know what to say to you.

Are you going to have another Number One record?
I am promoting like crazy so I hope so.

Is promoting 'doing your head in'?
I feel like sometimes people haven't read the script, they're still asking me about Kanye. I'm like, 'okay, I know you've read the press cuttings – so please don't ask me how I met Kanye again'.

How did you meet Kanye?
Well I met him in LA and…

That was a joke.
Okay.

Where would you be now – literally, right now – if you hadn't met him? Do you think you'd still be sitting exactly where you're sitting now?
I'd probably be where I am. I'd have met John Legend some other way – I feel like I would have met him somehow. Regardless of Kanye there's too many other people who are connected to John for me not to have met him.

Do you not feel that simple decisions made at specific points in life can send you off in a totally different directions?
But at the same time, if something's mean to happen, it will.

Are you the sort of person who thinks that 'bad things happen for a reason'?
Yes. And I think that when good things happen, too. If it was meant to be this way, it would have been this way.

If everything is inev­it­able and you can't stop things happening, why not just sit around at home?
You have to put yourself in the path of luck.

But how do you know where the path of luck is? You're saying that there's choice involved now…
You follow your dream… I feel that regard­less of whether you know you're doing it you still sort of meander towards your path. Do you know what I mean? That's my thing. Things will happen. There are people who I've met now who I've known from ages ago and they're like 'I REMEMBER YOU FROM TEN YEARS AGO!' and when we met ten years ago neither of us knew what the relevance would be a decade down the line.  Like my A&R man I met him ten years ago when he was managing another artist, then when I joined the label I found out he worked here.

Female musicians are often called cows when men get away with being 'outspoken'.
Yeah, I don't know. I think it's all a bit 'whatever'. I feel I'm not going to tie myself off – and I'm not going to not be the person I am. It's too much effort. People often don't know what to expect of me, they sometimes say 'I was expecting you to be cheeky and rude but you're cool'. And I'm like, 'why do you think I'm rude, just because I have an opinion?'.

What do you have opinions about today?
The fact that the sun's not out.

Is that the only opinion you have?
It's just one of them. I'm not thinking about too much other than promoting this single. So I have an opinion about that: people should go out and buy my single.

What are you tipping for the top, music wise?
I think you've probably heard of one of the bands I like – The Ting Tings.

Who, like you, were dropped by one label before they had a Number One single with another label. A 'happy' Number One.
Well there you go. It makes everyone feel bad, hahaha… My sister's good. H‑Boogie. I'm very proud of her because she didn't do it off of me, and she'll probably be mad that I'm talking to you about her now. She sang on the 'Love Is Gone' dance track but she's working on her album with a lot of different artists and is working on a lot more dance stuff.

Is there anyone who hasn't already had a Number One or is related to you?
Natty and Leon Jean Marie. Leon came on my tour, he's cool, he's sound is nice and uncat­egor­is­able. I like that. He'll be alright.

Was having a Number One with 'American Boy' an anomaly or something which will define the rest of your career?
I think it was supposed to be there. I don't think it was an out of the blue thing – you feel the reaction from people, and people were wanting something different and fresh. I think let's change a few perceptions!

Is knowing that you had a Number One with the first single from this album going to affect the way you approach the recording of your next album?
No, abso­lutely not. It's still going to be me, I'm still going to be creating my music and doing what I do. You can't engineer fun, that's my approach every day in the studio. You have to be 100% Estelle all the time.

'100% Estelle' would be a good name for a Greatest Hits album.
It would.

Although it would never be 100% Estelle, because Kanye's guest rap will always take up a certain percentage.
But there's no guest rap on my new single.

But there would still be the guest rap on 'American Boy'. The album wouldn't be 100% you.
I've still got a few albums to go before my greatest hits!

But even if you release another 200 singles without a guest rap, there would still be the guest rap.
You're right. It could only ever be '99.9% Estelle'.

That's a rubbish name for a Greatest Hits album. Why did you even bring it up in the first place?
IT WAS YOUR IDEA! (Guffaws)

Thank you very much, Estelle.