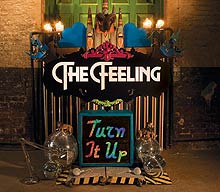 There is a remix of The Feeling's new single, 'Turn It Up'.

The remix is by Richard from the band and his lovely lady wife Sophie Ellis-Bextor except they are calling them­selves Mr & Mrs Jones, which is also the name they use when they are out and about DJing at cool nitespots.

Speak to Popjustice recently (THIS IS JUST LIKE A PROPER NEWS STORY!) Dan from The Feeling told us that "I noticed that Richard was on his laptop a little more than usual one week. I asked what he was doing and he said he was pissing around with the track and I thought, 'okay, this is inter­est­ing'. It’s quite fun, isn’t it? It’s a bit of a laugh, I don’t think they took it very seriously."

"I had to go and help out at one point — it was that slightly con­trolling thing that singers sometimes get, so I had to just back off. No, I’m quite demo­cratic. Sometimes I wish I was more in charge but that’s something that needs to be kept in check rather than encour­aged! I could quite easily become a tyrant. If I wasn’t sur­roun­ded by a bunch of people who put me down con­stantly… I throw toys out of a pram in my head. I have an internal pram."

And so he went on.

Anyway here's a clip of the remix — the single's out next week or the week after or something like that.