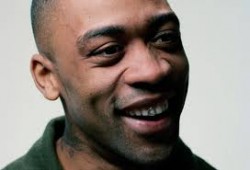 'If You're Going Out I'm Going Out Too' hitmaker Wiley has 'scored' his first UK Number One with 'Heatwave'.

The 'summer anthem', which features vocals from Ms D, sold 114,000 copies to deny Calvin Harris and Example, who also broke the 100,000 sales mark.

This is now the fourth single in a row to peak at Number 2 for poor old Calvin Harris.

On the album chart, Conor Maynard's 'Contrast' debuted at Number One, beating off Plan B who dipped one place to Number 2. Delilah, meanwhile, is a new entry at Number 5 with 'From The Roots Up', while most of the other albums either go up, down or stay where they are.

Updated: Well the third Pet Shop Boys b‑sides album is off to a good start