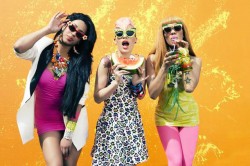 Stooshe have been chatting away about why their debut album didn't come out when it was supposed to, ie last November.

"We were listening to the album when we were signing stuff, when it was meant to come out, and we wasn't happy as a band," Courtney told BBC Newsbeat.

"That's our baby, that's our most pas­sion­ate thing and we didn't want to put it out with it not being perfect. So we took a bit more time, wrote a few more songs and then we're going to bring it out."

Clearly a bit annoyed with being asked about why it was delayed, she added: "Yes it's taken a long time but we didn't want to give you anything that we wasn't happy with."

But surely it means you'll sort of have to start again from scratch, right?

Apparently the album's out in May, but who knows really.