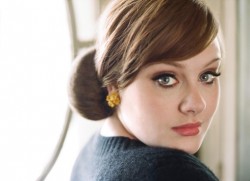 Adele continues her reign as Queen of the UK charts with 'Someone Like You' spending a fourth week at Number One and '21' spending a seventh week at the top of the albums list.

What is even more remark­able is that it's so far sold over 100,000 copies each week, equaling a record set by Leona Lewis' 'Spirit' and then equalled by JLS' self-titled debut.

Can we pause for a moment to imagine some kind of Adele-Leona-JLS collaboration?

The album is also at Number One in America and probably every other country that sells radios, TV sets or 'the Internet'.

Olly Murs has taken his clothes off in public again