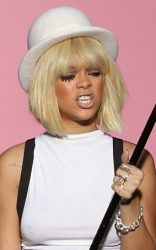 Rihanna and Coldplay will perform a duet of their quite good mid-tempo moanathon, 'Princess of China', at next year's Brits.

A Brits 'source' told The Sun: "Coldplay are really looking forward to per­form­ing Princess of China with Rihanna already. Brits bosses set their sights on getting them on stage together early doors."

The 'Mylo Xyloto' track was rumoured to have a single release earlier this year, which the band later denied.

Noel Gallagher, Kasabian and Brits house singer Adele will also do numbers at the event.

A Newsdump for 7 December 2011: From Rihanna and Coldplay at the Brits to Lady Gaga writing new hits