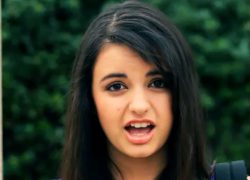 She may still be racking up views after her surprise appear­ance in Katy Perry's 'Last Friday Night' video, but it seems Rebecca Black's own infamous 'Friday' video may have been consigned to YouTube history.

The clip has been removed from the site in the midst of a dispute between the track's writers Ark Music and the singer herself. In an effort to cap­it­al­ise on the viral success of the song (which had reached over 200 million views), Ark Music recently decided to list 'Friday' as a rental video on YouTube, meaning that users had to pay $2.99 (£1.85) in order to view it.

This is said to have angered Black's rep­res­ent­at­ives, who then pulled the clip from the site alto­gether and are refusing to re-upload until the to-pay-or-not-to-pay matter is settled.

"We can confirm that we submitted a take down notice to YouTube as a result of the dispute we have with Ark Music regarding the 'Friday' video," a spokes­per­son for Black told TMZ.

Money makes people act in the most cunty ways, doesn't it.

She's on the edge of boring

"A little bit wrong but right at the same time."