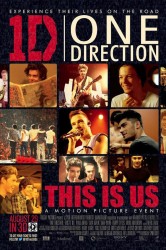 One Direction's cinematic opus This Is Us has 'grossed' an estimated $35m worldwide in its opening weekend, reports Variety.

The searing insight into the lives of Niall et al, made £20.5m in America alone where it looks likely to top the box office when the final chart is released later today.

The opening US gross is higher than that of Katy Perry's Part of Me ($7.1m), but not quite as good as Justin Bieber's Never Say Never ($29m) or Miley Cyrus' Best of Both Worlds one ($31m).

A bit of Lady Gaga's 'Ratchet' is now online

MKS' 'Flatline' is now coming out this Friday for some reason