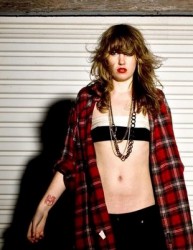 Ladyhawke has revealed release plans for her new album, her first since her debut in 2008.

The singer 'took to Twitter' to say "Getting the ball rolling, first single out in the nxt few months.Can't wait to get back into it again! :-)"

Pip had pre­vi­ously revealed she was feeling stressed about the release of her second LP, saying "it's going to be a com­pletely different album and style".

In other news regarding popstars taking Quite A Long Time to release their second album, Santigold has col­lab­or­ated with  Karen O of the Yeah Yeah Yeahs on a track called 'GO'.