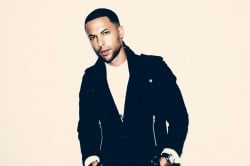 Former VS frontman Marvin Humes has 'landed' his own radio show on Capital FM.

The weekly slot will air on Fridays between 7 — 10pm and will — according to a press release — feature "hit-music and club tracks".

To celebrate this momentous occasion Humo will be doing special shows over Easter, one tonight at 8pm and then one on Friday at 7pm.

"It's an absolute honour to become part of the Capital family, the JLS boys and I have always had a close rela­tion­ship with the team and it only felt right to grab this oppor­tun­ity with both hands," the experieced press release quote-giver enthused.

"My DJ-ing is going incred­ibly well and having my own Friday night show on the UK's number one hit music station is the icing on the cake!"

We'll tell you this much readers, if he's going to be dec­or­at­ing baked goods while he's banging out the 'hit-music and club tracks' we'll def­in­itely be tuning in.