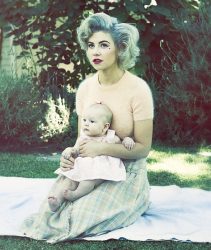 The 'Hermit The Frog' chanteuse will be singing some songs from her two albums and maybe some b‑sides if you're 'lucky' at the Manchester Academy on October 6 and then again at the Forum in London on October 11.

There's more inform­a­tion about all of that here.

If you'd like to see her sooner then she's also playing her res­ched­uled Lonely Hearts Club Tour in June, details of that one here.

J.Lo has done a track for Flo Rida's album too