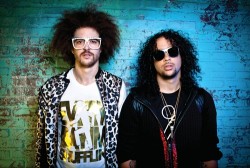 One cherished memory was when he vomited on stage in Switzerland. "When I threw up during Shots, it was awesome," the 36-year old man explained. "I had a long funnel going into my mouth on stage and did three shots in a row. One too many. But I won't forget it."

The first news has emerged of Christina Aguilera's comeback single

Quite a few popstars performed on VH1's Divas show