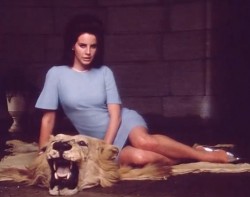 The title was revealed by the 'Cola' hitmaker herself at the premiere of her Tropico short film thing last night using the following words (as quoted here):

"I really just wanted us all to be together so I could visually close out my chapter before I release the new record, 'Ultraviolence'."

In fact there's a video of her saying those words right here:

Britney's been thinking about retiring from pop to have more kids