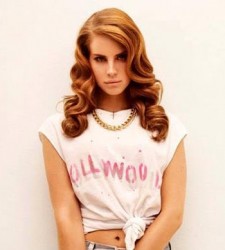 The singer made the announce­ment an hour before she was due on stage, citing a mystery 'illness'. Her spokes­per­son said: "I'm really sorry to share that due to illness Lana Del Rey is regret­tably not able to perform."

Del Rey's no show meant that Charli XCX was the main support to The Maccabees whose frontman Orlando Weeks told the audience  "we're really sorry Lana Del Rey was too sick to be here tonight", to boos from the crowd.

The singer formerly known as Lizzy Grant has been in London promoting the release of 'Born To Die' for the past week.

A Newsdump for 25 January 2012: From Leona's album out in November to Lana posing with an umbrella