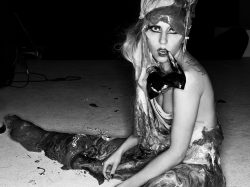 Lady Gaga has said she's "dev­ast­ated" at having to cancel her 'gig' in Indonesia following the decision not to grant her a per­form­ance permit.

'Taking to Twitter' the supposed Devil incarnate said: "We had to cancel the concert in Indonesia. I'm so very sorry to the fans & just as dev­ast­ated as you if not more. You are everything to me."

She then added: "I will try to put together something special for you. My love for Indonesia has only grown. #GagaSendsLoveToJakarta and all its people."

The show in the capital Jakarta was due to take place on June 3 but was cancelled over the weekend by local promoters Big Daddy Entertainment, following protests and threats from con­ser­vat­ive campaigners.

A follow up to 'Watch The Throne' "is coming"

The Wanted want to design a fashion range