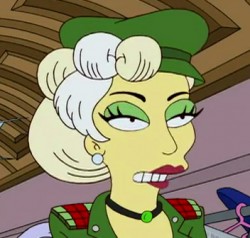 Ahead of her appear­ance on the show next week, The Simpons have released footage of Lady Gaga recording her cameo.

"You think her dresses in real life are crazy, what 'til you see what we draw," says executive producer Matt Groening in the clip, describ­ing her as "fantastic" in the episode.

Gaga didn't even seem to mind the cast and crew taking the piss too much. "Sometimes it was very endearing," she said of the exper­i­ence. "Other times they were making fun of me, I'm making fun of everybody else."

The episode airs in the US this weekend and you can see the behind-the-scenes clip below.