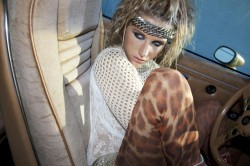 The Flaming Lips' Wayne Coyne  has revealed that he had to convince Ke$ha not to take acid during their recent recording sessions.

Talking to Pitchfork about their col­lab­or­a­tion on the band's forth­com­ing double-album 'The Flaming Lips And Heady Fwends', Coyne explained that Ke$ha's lyrics on their song are about "the end of the world, but she's also on ten hits of acid, so she's having a good time".

When asked if she actually was on acid at the time, Coyne said: "Well, when I got to her house, she said, 'I've never taken acid, so I can't sing about that stuff'. She's done lots of other drugs, but not acid. So she was like, 'why don't we do some acid, and then I can sing about it'. She told her assistant, 'go get us some acid'."

Unfortunately we'll never know what would have happened as Coyne convinced her to stay sober. "The way she is, it's as though she's on acid already," he explained. "I thought, 'fuck, how crazy is that going to be [if she takes acid]?'."

Because Easter is all about amazing comebacks