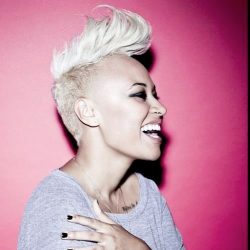 Emeli Sandé, JLS and Labrinth are offering fans the chance to duet with them in an advert that will air during the Brit awards next month.

Organised by the award show sponsors Mastercard, fans are being encour­aged to go to www.somethingforthefans.co.uk and upload a video of them­selves singing.

The winners will then appear in the advert with their popstar of choice (well, from that list above) and will also get VIP tickets to the show and the after party.

As quoted in the Daily Star Playlist, Sandé said (and this is just shit off the press release isn't it): "To be able to sing with someone who has supported me is such an exciting oppor­tun­ity – I can’t wait."

For JLS' Marvin it rep­res­ents the chance to do a little role reversal: "We are looking forward to taking on the Simon Cowell role and being judge."

Florence + The Machine will be touring a lot in 2012