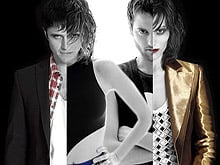 The never not amazing Dragonette have debuted a teaser clip from their forth­com­ing third album.

Labelled simply as 'Tease', the 27-second clip was uploaded to their Soundcloud account and the band have promised that further snippets of new material will follow in the coming months.

The follow-up album to 2009's 'Fixin' To Thrill' was initially scheduled for a 2011 release, but failed to materialise.

Responding to a fan via the band's official Twitter account yesterday, they confirmed that "new tunes will begin appearing soon in the new year".

In another tweet, they clarified that they were " aiming for late spring or early summer".

Police have arrested a man in connection with Madonna's demo leak

One Direction warm up for each gig in a sauna