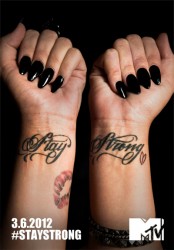 The show is expected to discuss Lovato's personal struggles with depres­sion, eating disorders, rehab­il­it­a­tion and self harm.

Demi tweeted: "Lovatics — I wanted to tell you FIRST about a special I worked on with @MTV." The tweet included this picture of the singer's Stay Strong wrist tattoos and self harming scars.

Stay Strong airs on MTV in the US on March 6. Expect few LOLs.

A Newsdump for 22 February 2012: From Adele 'flipping the bird' to Nicki Minaj lending her words