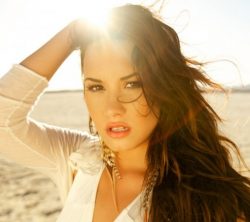 Having a bit of a chinwag with everyone's friend Ryan Seacrest (as quoted here) about Britney and the whole US X Factor thing, Demi said: "She's amazing and I'm having so much fun with her. You know, we obviously have both been through a lot so I think that we kind of just get each other a little bit."

Asked for more specifics about what she's actually like, she continued:  "We're still getting to know each other of course, but she's just so much fun to work with, she's really genuine and she's kind of shy sometimes when the audience cheers for her."

"I think it's really sweet that she's so humble, but she's also really, really funny on the show."

Demi also 'revealed' that she's already started writing songs for her fourth album but that she hasn't "come up with a lot yet".

Twelve 'Skyscraper's would be ideal to be honest.

will.i.am's been working with Dr Luke on his new album