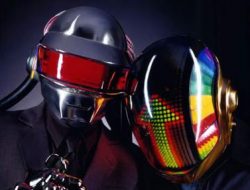 The song — which is the biggest-selling single of the year so far — reached the milestone on its 69th day on sale, and is the 136th single in the UK chart's 60 year history to sell more than 999,999 copies.

Fellow recluse Nile Rodgers had this to say about the achieve­ment when asked by The Official Charts Company: "The fact that 'Get Lucky' has sold a million copies in the UK is one thing, but to do it in 69 days?! I’m awestruck."

Now Pharrell's attorney has accused will.i.am of "revisionist history" over this 'I AM' business

One Direction have won a Silver Clef Award