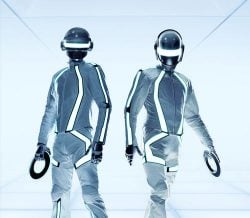 Daft Punk have com­plained that elec­tronic dance music is having "an identity crisis".

As reported by The Guardian, Thomas Bangalter says that EDM is "in its comfort zone. It's not moving one inch. That's not what artists are supposed to do".

"Today, elec­tronic music is made in airports and hotel rooms, by DJs traveling," he continues. "You hear a song – whose track is it? There's no signature."

'Bangalter' also had one or two things to say about Daft Punk's new album: "There was a sense of searching for a record we hadn't done… [We tried] to make robotic voices sound the most human they've ever sounded, in terms of expressiv­ity and emotion."

The new album, titled 'Random Access Memories', will be released May 12.

Little Boots has written a song with Annie