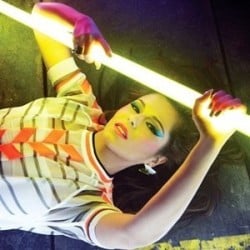 Following her appear­ance in an already legendary mul­ti­col­oured catsuit, Cheryl 'Cheryl' Cole has 'let slip' that the second single from 'A Million Lights' will be either 'Under The Sun' or Screw You'.

Speaking to a mob of micro­phone thrusters (as reported here) at the Capital Summertime Ball, the 'Love Bomb' song­stress admitted that she "was probably going to get a bol­lock­ing now" for revealing the vital pop info.

Although she did look at someone in a careful manner before she said it, so it's probably all okay.

A bit of the Justin Bieber and Drake song has leaked