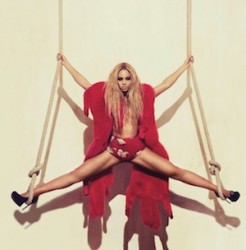 Beyoncé may need to get a babysit­ter in as she'll be due in court at some point this summer.

The New York Post are reporting that a Manhattan judge has given games company Gate Five, with whom Beyoncé was due to release a Starpower: Beyoncé singing game last year, the go-ahead on their $100m lawsuit. The lawsuit was brought after Beyoncé pulled out of the reported $20m deal with three days' notice.

"You continue to negotiate right up until the time you pull the plug. That is not going to work with me," Justice Charles Ramos told Beyoncé's lawyers.

Beyoncé's team contend that they were within their rights to pull out because Gate Five had yet to put their financing in place.

Let's be honest, how good would that game have been.

Adam Lambert is not just for The Gays