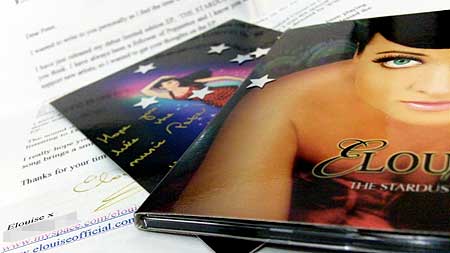 We don't half get sent a lot of shit. This package from songstrel Elouise is not shit — it's very good. But it's so well presented that even if it WERE shit we'd still feel a funny sort of warmth towards it.

2. Covering letter
It's polite, its grammar is impec­cable, it's broken into small para­graphs and it covers all the necessary points without descening into waffle. It explains who Eloise is (she's a singer), who she's been working with (Kylie's musical director Steve Anderson, solid gold pop legend Terry Ronald) and where we might have heard of her (that 'All New Hurly Burly' show that was in London the other month), and it gives full contact details at the end in case we want to get in touch, which we don't really but if we did we could.

3. Silver stars that fall every­where when you open the package
These are usually annoying but we'll overlook it on this occasion as they're clearly quite 'on message'. Usually they're shoved in a Jiffy with the latest demos of some post-goth noise merchant and are nothing to do with the music. That is BAD use of silver stars. It's a fine line, readers — if any bands reading this are unsure whether packages they're due to send to the media are 'silver star appro­pri­ate', we suggest you err on the side of caution.

4. A CD con­tain­ing three songs.
Three tracks is the perfect number. The first of these is a little bit (totally) like Dusty Springfield's version of 'If You Go Away', the second is Big Ballad O'Clock and the third is about a fireman, at which point it becomes a bit silly but not to worry. And what happens when you put it in iTunes?

That's right — it's all correctly tagged so you don't need to do it yourself when you inev­it­ably import it to your iTunes library and hammer tracks one and two for days on end due to them being amazing. Well done Elouise.